Company bike can pay off for employers in many ways. 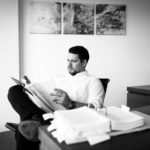 Company bikes are becoming increasingly popular among both employers and employees. According to the Federal Association Future Bicycle (Bundesverband Zukunft Fahrrad), the market is growing consistently, and last year alone roughly half a million company bikes were added to Germany’s roads.

When employees ride a company bike to work, it benefits both their health and the environment. In addition, it also enhances the company’s the image as an employer and sustainable company. Furthermore, it also improves the company’s carbon footprint. Given the omnipresent traffic jams on congested roads, company bikes are becoming an increasingly attractive alternative to company cars, especially in major cities.

Employers can purchase or lease company bikes to make them available to employees for use. A common model is the three-party relationship consisting of the employer, the employee and the leasing company. The company concludes a leasing contract and the employees can go to a bike store to select their desired bike within a specific price range, regardless of whether it is a racing bike or cargo bike, electric touring bike or a mountain bike. The leasing company purchases the bike and transfers it to the employer in return for payment of the leasing installment. In turn, the employer transfers the bike to the employee, who may use it for business and private purposes.

There are two variants, each with different tax classifications:

It is important to bear in mind that both variants incur sales tax. This is generally borne by the company. However, it can be passed on to the employee. In addition, the employer can recover the sales tax from the leasing installments from the tax office as input tax.

Company bikes have other advantages over a company car: The journey to work with a company bike is not taxable. In addition, the commuting allowance of 0.30 euros or 0.35 euros per kilometer can still be claimed.

These regulations apply to all e-bikes that do not exceed 25 km/h and, therefore, do not count as motor vehicles. Faster electric bikes are subject to the regulations for company cars.

The rights and obligations have to be clearly defined: Is private use permitted? Can family members also use the bike? Who is responsible for maintenance, repair and insurance against theft and property damage? Who is liable for accident damage?

At the end of the leasing term, leasing models usually include the option to purchase the bike for its residual value. To keep the tax authorities at bay, the transfer agreement should not include a binding right of purchase. Providing a purchase offer at the end of the leasing period is a better option. Any price advantage may have to be recognized as salary. Last but not least, the “principle of equal treatment under labor law” needs to be considered: The decision regarding who receives a company bike, and who does not, has to be adequately justified.

But what happens to the bike if employees resign before the end of the leasing period? The leasing contract remains in force and employers run the risk of being left lumbered with the bikes. The only option is for another employee to take over their colleague’s company bike. However, this is rarely successful because of the wide range of configuration options, and also due to the size of the company bike. In view of this, companies should reserve the right to terminate the leasing contract prematurely against compensation. Allowing portability to a new employer by permitting the leasing company to change parties is also recommended. If the employer has purchased the bike, it becomes a company asset which employees are required to return, just like a company cellphone or laptop.

In some circumstances, a pool solution can also be a viable option. Employers lease an entire fleet of bikes in the company, then rents these individually to its employees for business and personal use. The advantage of this approach is that the rental fee is completely tax deductible. Furthermore, situations in which the employees resign, take parental leave or a sabbatical are easier to resolve.

Charging on the premises

More and more companies provide their employees with free charging stations on the company premises. Income tax is not due on the resulting non-cash benefit: Charging e-bikes, which are regarded as motor vehicles, is legally regulated as tax-free until the end of 2030. On grounds of equity, the Federal Ministry of Finance has clearly stated that this also applies to electric bikes with a maximum speed of 25 km/h. If employers subsidize the charging of the e-bike at home instead, this is subject to regular taxation.

Does the works council have a say?

If the provision of the company bike represents a non-cash benefit, the works council may have a say in the amount of the non-cash benefit pursuant to Section 87 (1) no. 10 of the Works Constitution Acta (BetrVG), under certain circumstances.

As already reported, electric mobility in the company fleet offers numerous tax advantages. However, HR managers have to consider a number of differences with regard to company bikes in comparison to company cars in order to avoid any legal and tax pitfalls. It is also important to ensure that the regulations governing the three-party relationship with the leasing company and employees are properly coordinated.